I ran into Rafael on my way back to Saltillo from Mazapíl, México. I had spent the day at the Peñasquito gold mine, about 25 kilometers west of the town of Mazapíl in the high desert of Zacatecas state in north-central México.

The road that goes from Salaverna to Concepción del Oro is fascinating, to say the least. Everyone had recommended that I not take the “old” road. Until the mining project began, it was the only way to head west from Concha del Oro to Mazapíl, Salaverna or Cedros. Two new roads had been cut through the mountains to accommodate the heavy equipment and increased traffic that would be coming and going from the mine. The new roads were OK, but nowhere as interesting as the original road. It was narrow, literally hand-made, full of curves and constructed of large river rocks embedded in dirt. Everyone told me to take a four wheeler…I employed my Ford Fiesta rental instead. Needless to say, it was a fascinating drive down a seldom-used road. I didn’t pass or run into any other vehicles but I was stopped by Rafael’s herd of goats just before the abandoned village of Aranzazú. 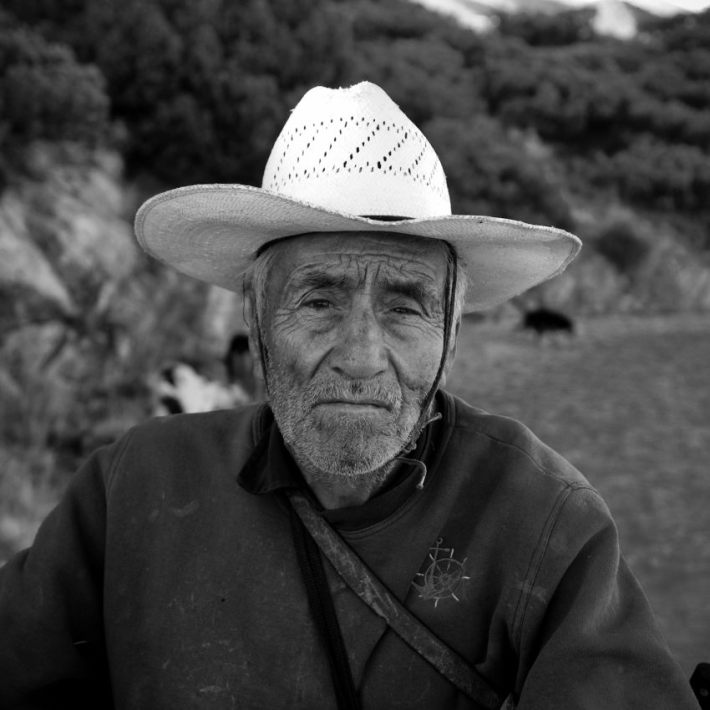 I parked the rental in the middle of the road and yelled up the mountain to say hello. He was very friendly and never really stopped talking after that. I quickly asked if I could photograph him and we continued our conversation. I’ve always been fascinated by shepherds and he didn’t disappoint. They always have a calm and nobility about them that is reassuring.

I made the photograph with my Sony R1, which is a wonderful camera. It has an LCD viewer on the top of the camera that allows it to be used like a twin lens reflex. I’ve used a Rolleiflex and a Yashica Mat 124G and love them, still do. No one expects you to look down into a camera and that’s precisely what makes them so appealing to photograph people with. I also love the square format, their shutters make a faint click, they use 120/220 roll film and the lenses are fast and tack-sharp.

I still have the Sony but replaced it as my regular camera with a Pentax K20D SLR. The Sony has a 10.3 megapixel CMOS sensor that creates a very nice RAW file. The primary reason for replacing it was the shutter lag. The Pentax shutter fires when the release is pressed, the Sony had a frustrating lag that got absolutely silly when photographing people, like Rafael. It seemed like I wanted to take the picture after the one I had already committed the camera to, thereby missing a shot. Live and learn.

Rafael made my day. I had had a long day in the hot dry weather and was physically tired. I perked up after meeting Rafael and enjoyed the 2-1/2 hour drive back to Saltillo. The rental car did feel a little different once I hit smooth pavement again. Hey, it’s a rental!