My wife’s family is from Olney, just 19 miles southwest of Archer City. We also lived in Wichita Falls, 25 miles north. Archer City carries quite a bit of fame for such a small, one traffic-light town. The novels (and movies) “The Last Picture Show” and “Texasville” take place and were filmed in town. Larry McMurtry, the author, is from Archer City and owns a collectible book store that draws people from everywhere. When Bogdanovich and McMurtry were driving around Texas looking for a town to set their film in they drove through Archer City, Bogdanovich saw the flashing red light in the intersection and said “this is it”. True story.

In the movie, the town is called Anarene, which no longer exists, but was located halfway between Archer City and Olney. The only thing identifying its location is a Texas historical marker by the side of the road on Highway 79. I’ve always liked the name Anarene. After checking my links in Wikipedia, it appears the town was name after Anna Laurene Graham, a name combo that I have found to be common in Texas. 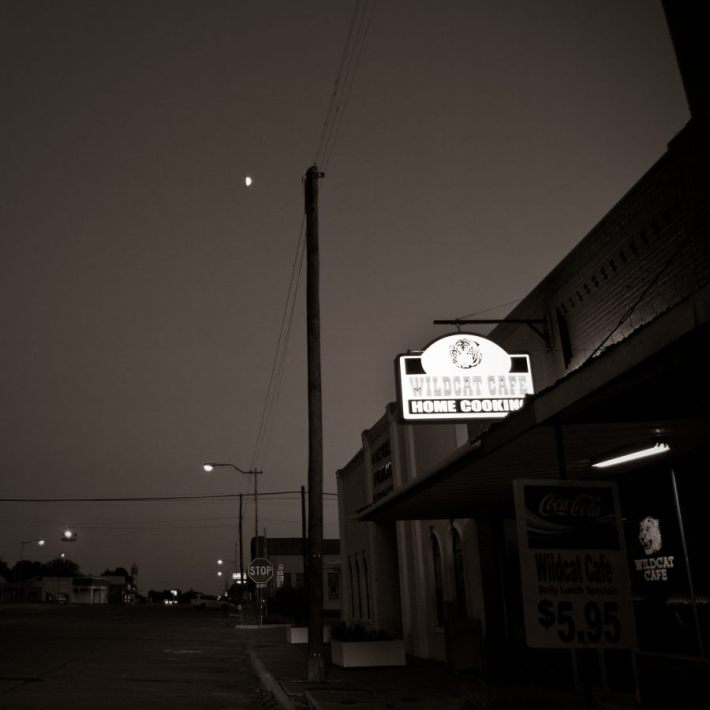 I was driving south after making some photographs just north of Archer City, again on Texas Highway 79. The sun had already set but the sky still had a deep blue color to it. I stopped my truck next to the Wildcat Cafe and bracketed a lot to ensure a good exposure and make sure that I had an image that didn’t have a lot of noise. It was dim so I used the mirrors on my truck as a tripod and turned on the anti-shake switch on my Pentax. I wanted to see if it worked as advertised. It did.

I’m very pleased with the detail as the range of tones is long. The sign was bright white and I didn’t want everything else dropping to black without detail. The darker areas held up well and have a nice softness to them that works well. Sometimes the shadows just get muddy but these turned out great, with a little “creaminess” that is helped by the sepia toning.

There’s nothing left of Anarene but I’m confident that I’ll find something along the road there to photograph. My wife’s great aunt, Johnnie Belle, taught school in Anarene in the 1920’s when oil brought 200 people in. The school house is also gone and the only reminder of the town is the historical marker and the occasional “re-branding” of the water tower in Archer City during filming, when the tank reads “Anarene”.